Hi all,
I know its been a long time but we're still in business we decided as our next project we would make environmentally friendly bird feeders. So Grace and I called the bird sanctuary a few days ago they said that the charity group and I could have a tour. But they said that the land around the sanctuary wasn't there's it was the government's and that we would have to call them. So we called the NCC they said that we would have to e-mail them and they'd get back to us. So we e-mailed them and they just got back to me. The charity group will not be hanging bird feeders at the bird sanctuary because the government does not encourage feeding wild animals. Although its sad that we will not be hanging bird feeders at the sanctuary we under stand the precautions the government is making and we respect them. But we will be hanging bird feeders in our back yards and having a tour of the sanctuary. We will also start making videos of us making the feeders and hanging them so others can have a chance to learn to make bird feeders and keep our birds well fed. We will be starting a youtube channel sometime soon although we haven't yet made the channel we already have a few ideas if you have any ideas for videos on how to make our world a better place feel free to write them bellow this message. If its okay send in your name and we'll add it in the video.
thanks for reading,
Jasmine
Posted by Quirkyteacher at 8:46 AM No comments:

At our last meeting, we talked about making bird feeders to take to the Wild Bird Sanctuary.  We should be meeting soon to start making plans.  My kids are getting excited and right now Devin is even making one for our house with his Poppa.  Stay tuned for photos of our final products.
Posted by Quirkyteacher at 6:30 AM No comments:

This blog entry is talking about the article I wrote for the Kanata Kourier newspaper. You might be saying "It's about the Charity Group." Well I have to disappoint you, it's about birthdays.  Instead of birthday presents from your friends I want to encourage you to ask them for donations it could be food or money or anything really.  I have already been doing it for several years.  I quoted " Imagine 10 different kids invite 10 kids to the birthday party each kid donates 10$ we would end up with 1000$ going to charity."  I think that would be AWSOME! but what if more then 10 kids do it we might end up with 1,000,000$ going to charity.  So if you help a charity please comment below and tell me how much you raised, how many people were at the party, what charity you helped and of course your name. And at the end of the year when everyone has had a birthday the charity group and I will write an article about everyone who donated.


Thanks for listening Jasmine :)

These are pictures of me and my friends, who also happen to be members of the charity group at my last birthday collecting food for the food bank. 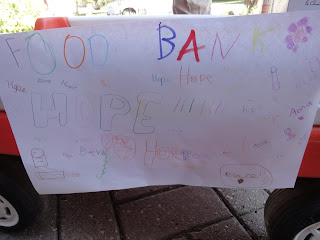 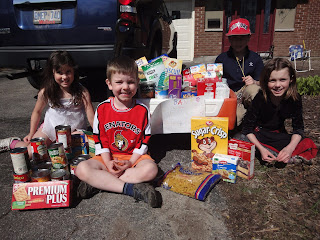 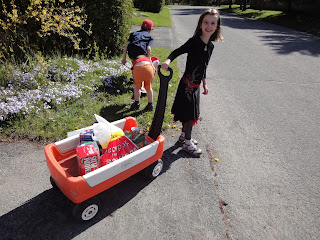 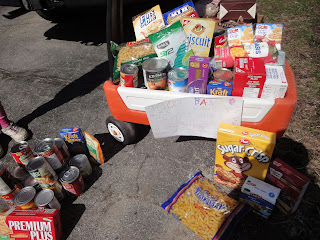 Posted by Quirkyteacher at 4:45 PM No comments: 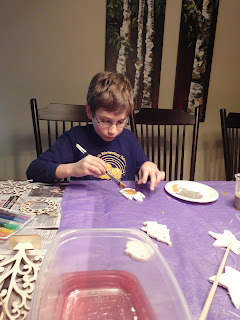 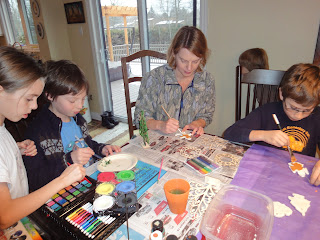 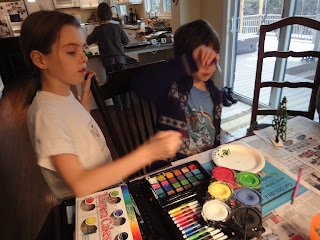 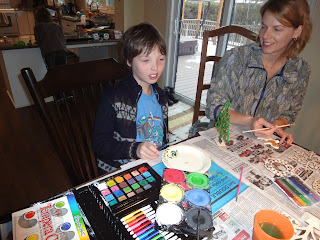 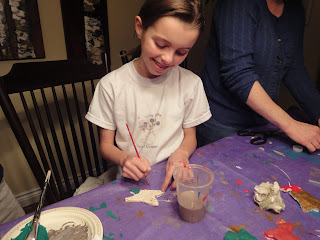 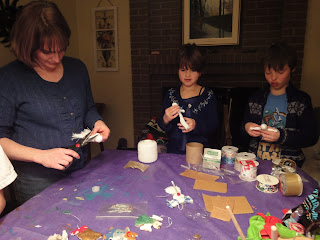 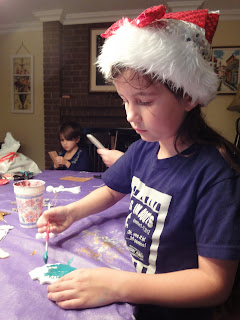 Today some of us got together at Jackson's house to prepare crafts for the Wild life Refuge fundraiser.  Anna and Jennene lead the group in making beautiful angels while the rest of us painted Christmas tree ornaments.  Thanks for hosting Jackson and Arran!

Next weekend you can make a donation to help buy Hay for the animals and choose some of our craft items off the table :)

Dunrobin Community Centre on Saturday, Dec. 8th.  Jasmine and Grace will be there from 2-4.

Scottybob here and as you may have seen, the others have shown you a little thing about CCWR. But I'm gonna tell you about our journey at CCWR!

So, when you get there the first thing you'll probably notice the alpacas. Yes, alpacas. When you get into the main animal part, you'll notice some pot-belly pigs which are actually pretty awesome because they had tusks! Small tusks, but tusks. 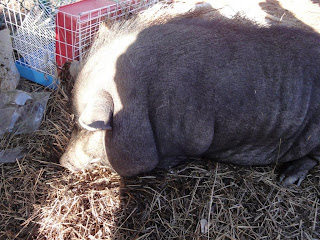 This is one of the pigs, can't remember which is which... or their names. But if you look by it's mouth you'll see the tusks. I'M NOT CRAZY!

Moving on. There are 3 alpacas, which names I also can't remember! But you would be allowed to feed them (as long as you weren't in the pen) and when I di, I laughed because they would lick your hand and it kinda tickled... 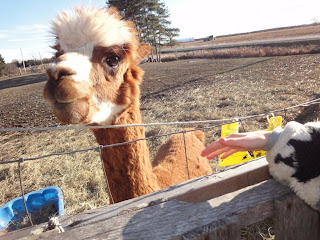 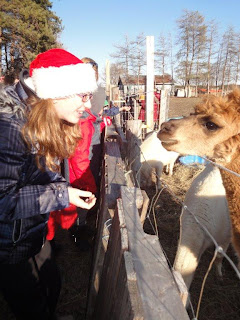 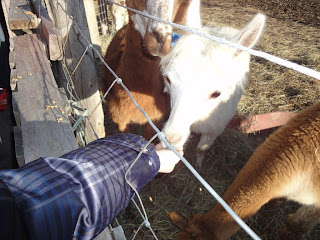 But of course, I have to mention that there was HORSES! And ponies too. And if you got close enough, you could pet the ponies! But I don't think we have a picture of the ponies so lets just talk about the next part.

In the next part there was a barn with goats with straight horns, curly horns, long horns and short horns. And of course, you could pet them! But also among the goats were big HORSES AND DONKEYS! Of course, I enjoyed petting the donkeys and I bet that somebody also wanted to have a pet goat. Maybe. Put of course, since the animals got to roam in the open, you had to wear rubber boots or your least favourite shoes, because there was poop everywhere. If you visit, fair warning... WATCH YOUR STEP!

So how do they manage to feed the animals and take care of them? Well, they would go out for an hour and a half drive there and back, buy 250$ worth of hay and head back for another hour and a half! If you don't know how much hay it is... 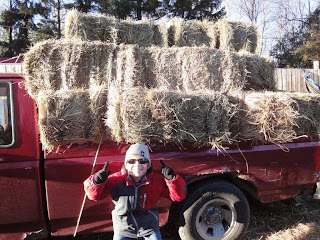 And that's only the front side! Just saying, that only lasts for about a week. So put it together: 3 hours of driving, about 800$ a month and they go through all that hay in a week! So now you do the math, how much do they spend a year, I'll get you started 800x12=?... HAVE FUN!

So I would say that going there was pretty successful  Now, if you'd like to help out, you can donate things or stuff but that's not my job to tell! To kind of close this off, I want to leave you with a picture... 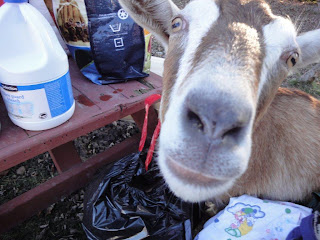 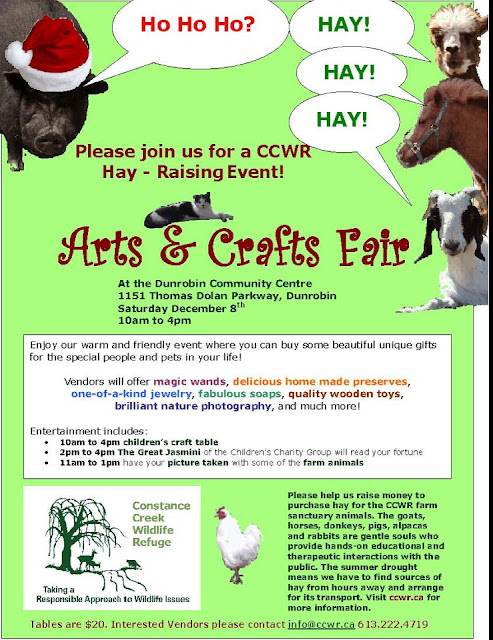 Some of the members of the Charity Group will be at this Craft fair in the afternoon at Dunrobin Community Center to help raise money for hay.  Hope to see you there.

We will have cards, Christmas ornaments, jewellery, book marks and more.... come check us out!
Posted by Quirkyteacher at 6:46 AM No comments:

Great meeting today Charity Group.  Here are some photos and additional information on The Milk Bag Project. (Using milk bags to make sleeping mats for those with no beds in places like Haiti)  Here are Leanne and Devin doing the first step, which is folding the milk bag into eighths on the long side. 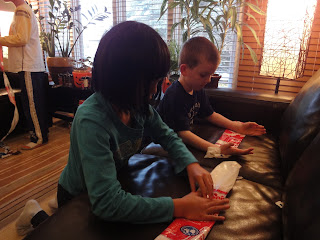 The next step is to cut both ends of the milk bag off and then cut what is left into 1 inch pieces. Here we have Pam and the Kormylo Kids (Jackie, David and Kelly) cutting the bags. 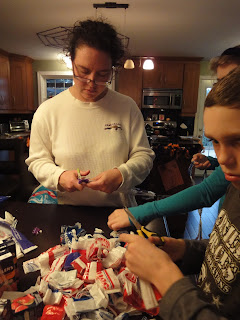 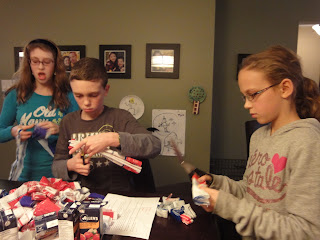 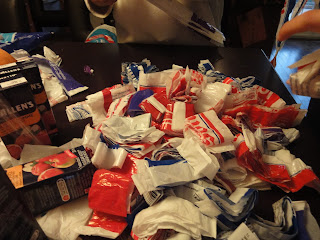 
Next we take the pieces and open them up and loop them together.  We keep adding loops until we have about 100 of them strung together.  Then we place them all into a milk bag with one end sticking out so the crocheters can find the starting spot.  Here we have Quinn, Jacintha and Jackson looping together the plarn (plastic yarn) 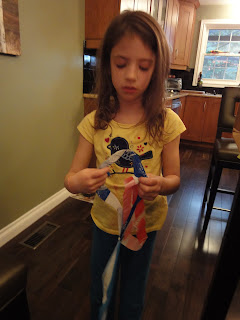 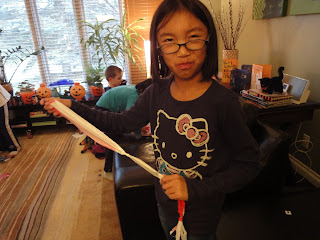 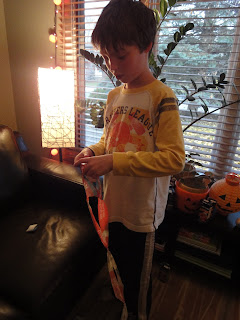 Check out this link to access the local information.  It includes times of upcoming workshops and many more links on where the mats go and how to make the mats and this link has a video tutorial that shows the crocheting (although they use a different method for making the plarn first).

Thanks for a super meeting today and for all the help on the Milk Bags.  If you finish making your plarn, you can deliver it to our house or give it to me at school  if you are not going to try crocheting a mat yourself :)

Posted by Quirkyteacher at 5:51 PM 2 comments: